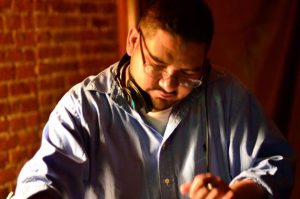 What is the name of your show? Bring tha Noize Radio

Is there a story behind your on air name? It’s a derivative of my deejay name Eduardo Scizzahandz. It was many years ago, probably around 1994 or 95 when one of my emcees, Telly Tell a.k.a. Horeson J.A.E (from my group A Lab Cult/Car Salezmen Inc./Mala Gente) saw a college application laying around in the lab and noticed that my middle name was Eduardo. He said, “You should call yourself Eduardo Scizzahandz!!!” In Hip Hop, artists like to or USED to like to select names that embodied the b boy, braggadocio style of selecting attributes that distinctly, uniquely described their abilities. I was always known for scratching and cutting. You also had to be certain that you could back your name up. Haha. Previously my name was Dj Oro…the name change is more exciting wouldn’t you agree?

What’s your show about and when does it air? The finest in turntable rhythms and theatrics, basically…Hip Hop, Breakbeat, Jazz, Funk, Dance Hall, R and B, electro, fusion, supa dynamite soul, Old and New school…Spanish, Jamaican, Caribbean, and so much more. It airs on Saturdays from 10 am-noon. It also features musicians, poets, emcees, producers, promoters and of course skilled deejays.

How long has your show been on the air? Since 2011. It was part of the Mega Blast Monday line up including my turntable partner Dj Thunder of the Thunderstorm Mix Show, and the Gozza Strip.

What do you like to do in your spare time? Coach and do everything with my son, watch sports, especially boxing, record excavating and record shopping, work out routines with my deejay crews. Making mixes, promoting the culture. I’m an agent for the International Hip Hop Parade scheduled this summer in the Bronx. I love traveling, going to concerts, holding open mics, emcee battles, freestylin’. and I’m in some Hip Hop groups for which I exclusively deejay. I also dj independently as well as with a company. I do studio work for hire, enjoy movies, family, crackin’ jokes/pannin’ havin’ fun!

Tell us about a funny incident that happened during your show. Probably when I freestyled the weather forecast. Some cats heard it and were rollin’..talkin’ about high pressure systems, rain events and so fourth..lol. Other times freestylin’ and roastin’ the other deejays on air.

Have you gotten any strange requests during your show? Not too many; when they hear the styles played, they usually catch on and most requests are related to what’s being played. Since the show is pre-mixed and recorded, it’s difficult to honor requests. There was an instance when this guy kept calling all of our shows one Monday tryin’ to get his stuff played…it was horrid so we kept passin’ the buck like Michael Redd…lol

If you knew you were going to be stranded on a desert island and could choose only 10 songs, what would they be?
*Subject to change, in no particular order.
1.) Fela Kuti- Water No Get Enemy
2.) Sade- Kiss of Life
3.) Hall and Oates- Do What You Want, Be What You Are
4.) Heather- Billy Cobham
5.) Rebel w/o a Pause- Public Enemy
6.) R.E.A.L.I.T.Y.- Black Moon
7.) Microphone Wanderlust- INI
8.)Tragos Amargos- Ramon Ayala
9.) Camino de Guanajuato- Vicente Fernandez
10.) Nautilus- Bob James

What is one of your most memorable concert experiences? In 96, me and my buddy plotted to get into St. Andrew’s Hall-The Shelter in Detroit.The show was the Fugees, Bahamadia and The Roots, we had no $$ no tickets and still went out there to try to get in….after a couple of unsuccessful attempts, we got in carrying Hub’s bass and an amplifier! We were roadies for the night. We met Lauryn Hill, Bahamadia and The Roots…the concert was MIND BLOWING and we saw it ALL from backstage! Unbelievable..

Tell us something about yourself that people might find surprising. That I can mix, blend cut and scratch Spanish music as well…that I use turntables.

In the movie “WKUF: The Untold Story”, who would you cast as yourself? Esai Morales, Edward James Olmos, Psycho Les from the Beatnuts and George Lopez. 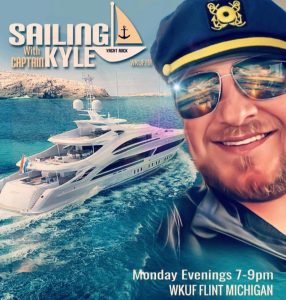