Sorry, there is nothing for the moment.

What was your show about and when did it air? The show was a throwback to great music from the 80’s and also features New Synth Wave, which has become popular over the past few years. My show aired on Wednesdays from 12:30 pm-1:30 pm.

Is there a story behind your on-air name?  I was wondering what would be the most retro-80’s name I could think of, and as I was looking up popular words in the 80’s the words Radical and Amp came up which both of them mean hype or hip or awesome. So, translated into 2019 vocabulary is doubly awesome!

What do you like to do in your spare time? I love to write music, play piano or guitar or sing out loud.

Tell us about a funny incident that happened during your show. One time I almost forgot to shut the mic off while playing “Take on Me” by A-ha, and I almost began to sing on air.

If you knew you were going to be stranded on a desert island, what are 10 of the songs you’d want with you?

What is one of your most memorable concert experiences? During the summer of 2018 I was finally able to go see Paramore live. It was amazing to see how much energy they all have. Then the friend who had come with me began jumping to other rows and dancing with random people. It was hilarious!!!

Tell us something about yourself that people might find surprising. I started as a musical theatre major, which a lot of people get surprised by because they know I’m at an engineering school. Then I start singing the whole Hamilton soundtrack and they believe me.

In the movie “WKUF: The Untold Story”, who would you cast as yourself? Mackenzie Davis 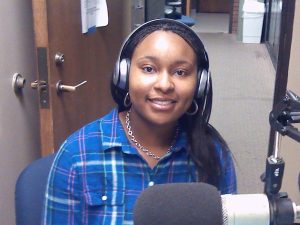