What was the name of your show? R.P.M.

What was your on air name? Is there a story behind it? My on air name was BWB, which stands for Bro With a Bra!
What was your show about? R.P.M. was a rock punk and metal mix for people that wanted to listen to older music or newer songs that weren’t as popular as others. I also did live interviews with local bands!
How long was your show on the air? It started in October 2015.
What do you like to do in your spare time? I love singing all the time XD other than that I am an intern at Kettering during my work term and love playing video games.
Tell us about a funny incident that happened during your show. Well there was a time where I kept forgetting the “FM” at the end of our station ID and my buddy kept mouthing it to me, but I still forgot xD (I’m better about it now).
If you knew you were going to be stranded on a desert island, what are 10 of the songs you’d want with you?
1. Ignorance by Paramore
2. Unapologetic by Halestorm
3. Bohemian Rhapsody by Queen
4. Evil Angel by Breaking Benjamin
5. The Sound of Silence (Cover) by Disturbed
6. Talk Dirty to Me by Poison
7. Jenny by Nothing More
8. If I’m James Dean, You’re Audrey Hepburn by Sleeping With Sirens
9. The Drug In Me is You by Falling in Reverse
10. Ashley by Escape the Fate
What is one of your most memorable concert experiences? There’s been a lot, but the most memorable is when I went to my second Black Veil Brides show and I had bought my own VIP’s. I was able to meet the band and hug them, I have been a hardcore fan since I was 13 and 4 years later I got to meet them. I cried tears of joy (literally) but stopped immediately because I was wearing eyeliner xD I baked Andy cookies for his birthday and he took them so it was a pretty good day!
Tell us something about yourself that people might find surprising. I actually do enjoy country music but mostly from the 40’s, 50’s and 60’s
In the movie “WKUF: The Untold Story”, who would you cast as yourself? Zooey Deschanel 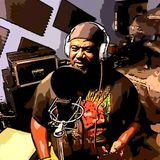 Talkin’ All That Jazz with Will The Thrill