What is your show about and when does it air? My show features a variety of music, as well as news directly affecting the community. It airs Mondays from 3 pm to 5 pm.

Is there a story behind your on-air name?  “Richard” is a pseudonym I’ve used in the past, and also the name of a popular RPG character I’ve played in the past. Seemed like as good a name as any for a DJ alias.

Have you gotten any strange requests during your shows? Not yet, but I’m sure someone will think of something really out of left field soon enough.

What do you like to do in your spare time? I play a lot of video games. Mostly Warframe and Minecraft. Yeah, I still play Minecraft. Sue me. However, I branch out to other games as they catch my interest.

If you knew you were going to be stranded on a desert island, what are 10 of the songs you’d want with you?
In no particular order:

What is one of your most memorable concert experiences? I was playing a Jazz Band concert in high school during a dinner dance auction and my band director accidentally dropped all his music on the floor. The awkward silence was immediately filled by the band playing “Brick House” (which we had memorized at the beginning of the year and no longer needed music for). I think that was the only time he was ever happy about us being able to play “Brick House” unassisted (we used to do it to annoy him during rehearsals).

Tell us something about yourself that people might find surprising. I sing bass. Most people wouldn’t assume that looking at me: I’m a thinboi.

In the movie “WKUF: The Untold Story”, who would you cast as yourself? Probably DJ Spindash.

It's an 8-track flashback as our automated brings you a mix of hits, forgotten gems and obscurities from the decade that brought us the pet rock and platform shoes. Click or tap "Read More" to access a sample of what you can hear on That 70s Music Show. 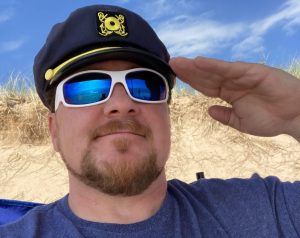